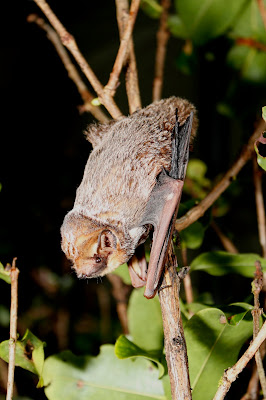 In December 2015, the Kahoʻolawe ʻŌpeʻapeʻa Working Group was formed with partners from USGS/PIERC, KIRC, Island Conservation and Maui Nui Seabird Recovery Project — each a partner of the Kahoʻolawe Island Seabird Restoration Project.

From this collaboration, a standardized method was developed to survey the presence or absence of Hawaiian Hoary Bats on Kahoʻolawe by installing bat detectors across the island in varying habitats. An endangered species, theʻōpeʻapeʻa (Lasiurus cinereus semotus) poses many biological questions that need clarification, e.g. are they on island? If so, how do they utilize the island habitat?

After one year of data collection, preliminary analysis has confirmed the presence of ʻōpeʻapeʻa— with interesting discoveries unique to Kahoʻolawe:


In addition to this data, the time of night the bats were recorded revealed another interesting find: the bats were not recorded until 2-3 hours after sunset and only until 3-4 hours before sunrise. This information suggests that the ʻōpeʻapeʻa migrate to Kahoʻolawe and then return “home” on a nightly basis, but doesn’t rule out the possibility of a small resident population. The first year of data shows bats being most active from late summer into winter with the peak detection rate in September. 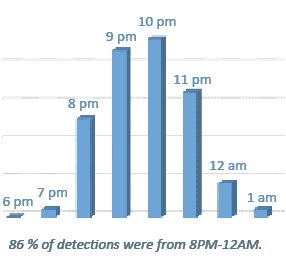 It is important to note while this is only one year worth of data; this is just the preliminary analysis. However, this answers our initial questions: the entire island of Kahoʻolawe is an important habitat presumably for the insect food resources that this uniquely Hawaiian endangered species feeds on. The ʻōpeʻapeʻa might even be coming over for copulation and breeding. It is hoped that funding can be continued in order to learn more about the ʻōpeʻapeʻa of Kahoʻolawe. The Hawaiian Bat is threatened by loss of habitat, deforestation and mortality due to wind turbines and predators. Future reforestation projects on Kahoʻolawe may enhance the habitat and range of this species.

The Hawaiian name ʻōpeʻapeʻa, is inspired by the Hawaiian hoary bat's image in flight, which is attributed to the resemblance of canoe sails and the bottom half of the much-celebrated taro leaf (kalo). The term “hoary” refers to their tan, reddish-brown, and silvery coats that appear frosted over. The ʻōpeʻapeʻa is our state mammal.
Posted by Kaho'olawe Island Reserve Commission at 1:22 PM